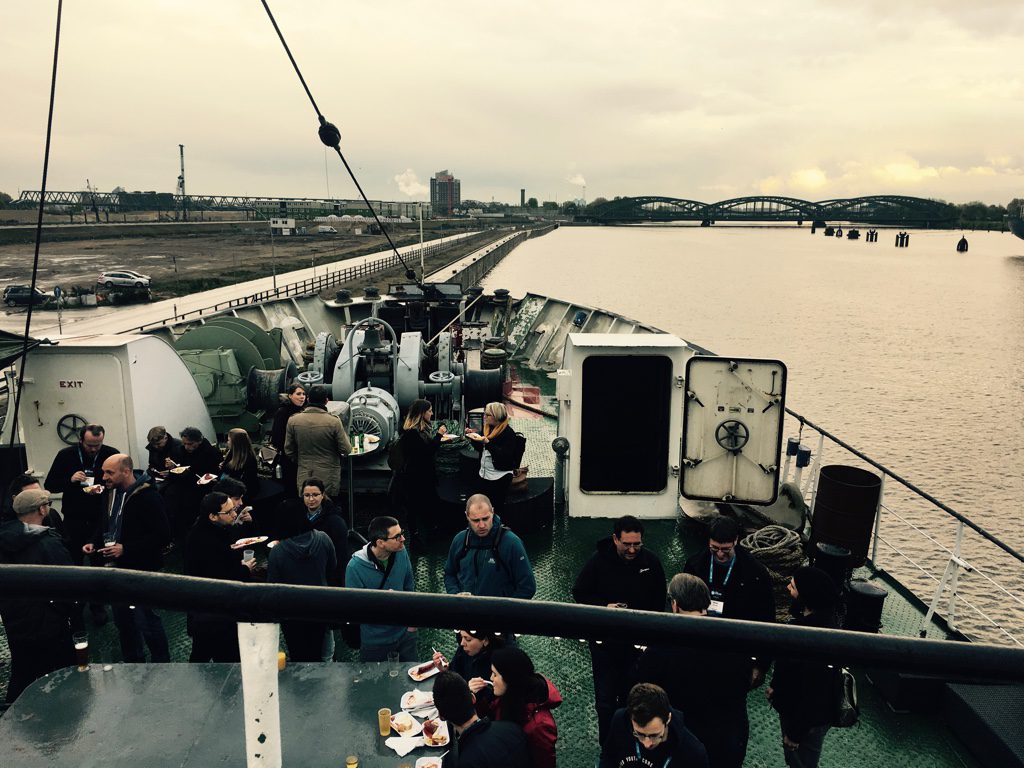 Afterparty on MS Stubnitz of Mind The Product Engage 2017 Hamburg

Last Friday I had the chance to visit the first Mind The Product (MTP) Engage Conference in my beloved Hamburg. The conference took place at the Katholische Akademie and accommodated round about 300 “passionate” product people like Product Owners or Product Managers and presenting 20 speakers. The “Engage” in the conference title stands for enough space for intense networking besides the talks.

After visiting “The Productized” last year in Lisbon, which scored in networking and in its inspiring workshops (Kai Halsinger really kicked ass with his Sixth Sense Design workshop), the MTP Engage was my second product conference. So the following is mainly a comparison of both conferences.

Here’s the overview of the talks I had listened to (for the overall schedule click here):

Definitely the most impressive talk was the keynote “Memento product mori” from Sebastian Deterding, who thrilled with his thoughtful topic about the ethic responsibility of today’s tech people! I wasn’t the only one in the plenum, who partly got a bad conscience of our bad habits, which came along with today’s ubiquitous computing technology.

Besides a fantastic presentation with a great storytelling around the novel “Momo” and a lot of illustrative examples of ridiculous products (Juicero:-) and misleading design patterns. Sebastian also performed with his body language. And he didn’t forget to show us that there’s hope of relief, when we start once again in designing and building calm, unobtrusive products.

The two hot topics, which were a common thread throughout all the talks and regarding the workshops on Thursday as well, were:

Especially the talk from Sabrina Hauptman & Wolf Brüning from the german online retailer Otto together with the keynote of John Cutler put this topic into the center! Sabrina and Wolf illustrated the way otto.de has gone to shift their people’s mindset from “delivery” to “discovery driven”. Which means that it’s more important to ship the right solution – maybe a little bit later – then shipping the wrong solution on time. Or to say in other words: Great ideas should live on, when you find them in an early conception phase and don’t get killed, because of a deadline.

They described, that it was a hard and long process getting there, but interestingly they managed it to reach this level from inside out: Their UX started 2012 to take responsibility for the initial discovery step, introduced 2013 Design Thinking as a framework and founded 2015 a “Discovery school” and a new created format called “InnoDays”.

Also the expressive John Cutler put this topic in the centre of his “Feature Factory” keynote and mentioned that it’s important to distinguish between output and outcome (in the meaning of impact).

The other big topic on the MTP Engage was “innovation” and how to create it. Besides some workshops concerning some more and more common techniques like Product Field and Design Thinking, Markus Andrezcak showed in his talk why companies often fail to creatw innovation on base of the “the three horizons of growth“-model/framework. It’s only possible if the company creates an environment besides the daily business, so that there is enough creative space to build a second product (a second “S”), before the first one dies.

Reflecting and mixing up all these statements, it’s important, in which horizon your company stands! You might be successful being more delivery-driven in the first two years (first horizon) and then shifting over to a more discovery-driven approach.

The prices for the best mind-blowing statements go to:

The networking characteristics of this conference were awesome! It started with a “blind dinner” on Thursday evening, meeting other product guys in different restaurants all over Hamburg was a great start into the conference, because you knew some people on Friday at the conference kick-off. Also the long breaks lead too many interesting discussions with other product managers across all industries. And it all ended with a cool afterparty on the “MS Stubnitz” ship. Two thumbs up!

Compared with last year’s Productized conference, the MTP Engage was nearly as good organized and offered more networking possibilities. So a big thank you to the orga team! Regarding the quality of the talks/keynotes the Productized confernce was in summary more inspiring! I’m pretty sure, that this wasn’t my last MTP Engage.